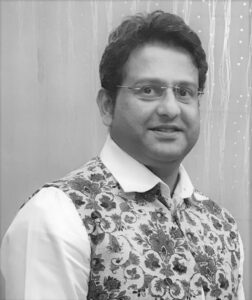 During his career span, since 1998, he has successfully incubated new businesses within the respective organisations and has always been the customers’ custodian that helped scaling it to the other countries, built global partnerships and achieving consistent double digit revenue growth year-on-year. His focus in the Global Corporate spanning over 20 years has been as being a value advisor to the respective large enterprises’ Senior Management team in aligning Organisation level Change Management strategies on end-to-end Digitisation. This has helped customers’ focus as early adapters to cloud transformation and help in driving deployment strategies that led to 100% usage as well as ‘zero’ customer attrition.
Anukumar pursued Entrepreneurship in the year 2017! Founded a Cloud Kitchen in early 2019 in Goa catering to 200+ outlets with a positive turnover within 6 months of operation. Did a successful exit in 2020 by selling his 100% stake to an overseas investor. In the meantime, stayed invested in a few start-ups and also a member of a few Angel Investors whereby, counselled and mentored the start-ups in their incubation stages.
The last assignment was being the CEO of Cubictree Technology Solutions Private Ltd., during March 2020 to April 2021. The key responsibilities were to revamp the overall Organization Strategy, Recruiting Leadership Talent, Innovative Pricing models, Cloud Transformation, and Assist in Seed fund raise. Sustained the business of USD 1MN during the COVID-19 crisis with “zero” customer attrition and helped in garner further add-on revenue from the existing customers across India region. Also, formulated expansion plan to UK and Asia Pacific region in the initial phase.
In the year 2016 to 2018, he was a part of the senior management team to set-up the SAP Concur operations which focussed in 100% SAAS business in India region from inception. He grew the customer base from 37 to 300+ customers by the end of 2018 with a Revenue Under Management of USD 20MN including Global Accounts. Worked very closely with Global customers in APAC, Europe, UK and US managing Global recurring revenue stream to the tune of USD 1MN+ from each customer accounts. Other areas of focus were in All-Up Marketing, Account Segmentation, Strategy for Sales and Marketing and Account Management. Was instrumental in maintaining the highest CSAT index amongst the APAC region.
He spent a decade from 2005 to 2015 at Microsoft where he was helping his customers in the change management to cloud transformation which was very nascent in the industry during that period. Launched Skype for Business (VOIP) in India spearheading a 100-member team along with Infosys, Tata Tele, Bharti Airtel, Big 4, DOT, TRAI, CII & NASSCOM and the R&D team of Microsoft in a record 1 year! Worked in Strategic projects by providing consultation and helped in influencing Nodal bodies (RBI, IRDA) in making the change to garner business opportunity to the tune of USD 1BN!
In the year 2000 to 2005, he was a part of the initial Internet Service Provider (ISP) team at Wipro and then went to start the IBM alliance in India which was a loss-making venture to a profit venture in a record 1.5 years! Innovatively created a Retail Channel for Wipro Partners with a secured yearly run rate business of USD 250K per partner.
Anukumar started his career in the Telecom industry in the year 1998 to 2000 at Zip Telecom. Introduced a parallel stream of month-on-month recurring revenue through an innovative advertising avenue called “Zip Media Avenue” (ZMA) by partnering with HPCL, BPCL, IBP and Vodafone (erstwhile Hutch). It was a state-of-the-art STD / ISD Wi-Fi enabled mobile payphone using digital media / touch screen technology which was very nascent during that period. He was leading the Product Management and developed Go-To-Market strategies for the unique product “Zipfone” which was a microprocessor based programmable payphone system with a built-in auto-conferencing unit which was a path breaking technology innovation in that period. It was later acquired by Kavin Bharti Mittal led Hike Messenger (Bharti Airtel)!
Anukumar is an Indian citizen. He completed his Business Strategy and Financial Acumen with Distinction from INSEAD and Kellogg on Marketing Excellence. He is an alumnus of IIM-Bangalore where he enriched his knowledge by pursuing a course in Digital Marketing and Media Analytics. He is a Finance graduate from Mumbai University and completed his MBA from MET, Mumbai.

Wife and Son – Wife was in the advertising / media agency (O&M) and carried on to pursue her early stint with Jet Airways heading the In-flight operations for 15 years! Son is 9 years of age in the 4th grade in Bombay Scottish, Mahim, Mumbai.

Loves Cricket. Passionate about football and represented South Mumbai League team. He was a National Level Athlete for Mumbai. Currently, following reverse aging through Calisthenics techniques in fitness management. An avid reader, loves Quantum Physics, Spirituality, Tai-Chi and Music. He is a complete movie buff and wants to produce / direct a movie some day!